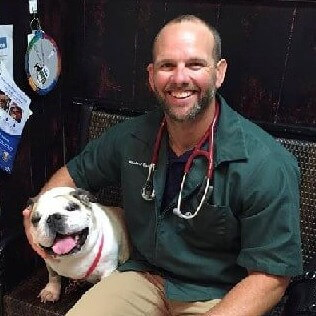 Dr. Bailey is a 1998 graduate of Auburn University College of Veterinary Medicine. He grew up in the small town of Wauchula, Florida. He received his bachelor’s degree in Zoology at Auburn University in Auburn, Alabama. He decided to stay for four more football seasons and attended Auburn University College of Veterinary Medicine. While at Auburn, he met his wife Dana. He has previously worked in Destin, Florida and Orlando, Florida. In 2002, he became owner of Woodland Animal Clinic in DeLand, FL, our sister hospital. He purchased Beachwood Animal Clinic in 2005. He and his wife have 3 children: Alan, Matthew, and Mandy. He also has 2 dogs, Abby (pictured) and Bentley (a Yorkie), and 2 cats. His menagerie also includes a guinea pig and a turtle. Besides practicing veterinary medicine, he enjoys fishing, water skiing, coaching his son’s football team, and spending time with his children. He is very involved with the community and is a member of the Rotary Club of downtown DeLand.